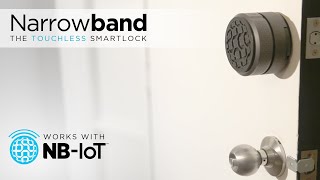 Narrowband IoT or NB-IoT is a wireless communication technology, classified as a 5G standard technology, and exists on telecommunication companies mobile networks. NB-IoT is designed specifically for the Internet of Things (IoT).

So what is The Internet of Things?

This is the concept of basically connecting any device to the Internet (and/or to each other). In short, the IoT is a giant network of connected "things" (which also includes people). The relationship is between people-people, people-things, and things-things.

IoT devices (things) includes everything from mobile phones, coffee makers, washing machines, headphones, lights, electricity meters, locks, wearable devices and almost anything else you can think of. This also applies to components of machines, for example a jet engine of an airplane or the drill of an oil rig. If the device has an on and off switch then chances are it can be a part of the IoT, or if the device doesn’t have an on/off switch, then it can be added and converted to an IoT device.

IoT and the future

The new rule for the future is going to be, "Anything that can be connected, will be connected." But why on earth would you want so many connected devices talking to each other? There are many examples for what this might look like or what the potential value might be. Say for example you are on your way to a meeting; your car could have access to your calendar and already know the best route to take. If the traffic is heavy your car might send a text to the other party notifying them that you will be late. What if your alarm clock wakes up you at 6 a.m. and then notifies your coffee maker to start brewing coffee for you? What if your office equipment knew when it was running low on supplies and automatically re-ordered more? What if the wearable device you used in the workplace could tell you when and where you were most active and productive and shared that information with other devices that you used while working?

On a broader scale, the IoT can be applied to things like transportation networks: "smart cities" which can help us reduce waste and improve efficiency for things such as energy use; this helping us understand and improve how we work and live.

The reality is that the IoT allows for virtually endless opportunities and connections to take place, many of which we can't even think of or fully understand the impact of today. It's not hard to see how and why the IoT is such a hot topic today; it certainly opens the door to a lot of opportunities.

NB IoT and its part in the IoT

NB-IoT can be defined as a radio technology for Machine 2 Machine (M2M) communications and Internet of Things (IoT) devices and applications. Think of it as a bit like 0G to 1G with mobile phones and mobile networks (we are now using 4G and 5G for our mobile communications). But the big difference between 0G and 1G technologies, which were built a long time ago mostly for voice communications, is that NB IoT is specifically built for devices to offer wireless transmissions over a more extended range at relatively low costs and using little power for long battery lives. IoT applications that require more frequent communications are better served by NB-IoT, which has no duty cycle limitations. In NB-IoT applications, typically small data volume amounts need to be infrequently transmitted.

NB IoT is often classified as a ‘Low Power, Wide Area Network (LPWAN) technology. LPWAN is sometimes also categorized under the term, ‘Massive IoT’, another industry term that just means those ‘billions’ of devices that typically transmit small data volume amounts, often sent at intervals (so no constant transmission but now and then) and with the need for long battery lives.

NB-IoT became an officially licenced standard for wireless communications in 2016 by 3GPP/GSMA, the organisations that manage the global mobile networks. It is currently the only globally licenced LPWAN technology, which means it must adhere to strict security and encryption standards and protocols. In addition the licencing means that NB IoT technology must meet high ‘Quality of Services’ provisions, built into mobile networks and their business ecosystems.

NB IoT is characterised by being able to connect devices that need small amounts of data, low bandwidth, and long battery life. One of its main focuses is on low energy usage and thus low power. Devices often remain asleep or in different levels of sleep/power saving mode, and are only woken up when needed (by pinging the device over the internet, pre-programming, or physically touching a button on the device when it needs to be used). For example a smart electricity meter may remain asleep all day every day except for 1 second at midnight every night, when it is pre-programmed to wake up and read the meter, and transmit this data back to the electricity company. This means that devices that in the past that typically only had battery life of weeks or months, can now last years. The battery life on some devices is up to ten years.

The importance of battery life for NB-IoT devices varies depends on the application – that is what are the devices for? If you use many IoT devices with batteries, then the overall cost of delivering a project or roll-out increases if these batteries need faster replacing. For example, in The Netherlands, there is an IoT project with tens of thousands of specially designed rat traps to protect the many dikes in the country. If you need to replace batteries in all the hardware in that project or similar ones, costs are high because that’s a manual job, it’s a service. So, the longer the battery life, the higher the ROI and the overall value of the business case. Very low power also means far more use cases that are possible with potentially vast numbers of devices.

​Latency is a time interval between the stimulation and response, or, from a more general point of view, a time delay between the cause and the effect of some physical change in the system being observed. For example in the case of NB IoT smart locks, the latency is the time it takes from hitting the unlock button on the smartphone app, to when the door unlocks (that is the time it takes for the unlock command to go up over the Internet and down to the lock to drive the motor to release the latch on the lock, so you can unlock your door and enter).

NB-IoT is more suited for circumstances where network latency is not the most crucial factor. For NB IoT latency is typically around 0.5 to 10 seconds. With other 5G standards such as what’s called ‘LTE-M’, the latency delays are often less than 100 ms.

​So, you will find NB IoT less in applications where near-real-time data might be required, in which case 5G- LTE-M,or other technologies is a better fit. So for example if you want to remotely drive a car or drone from your home in another country, NB IoT will not be appropriate as you need to have real-time data and almost no delay in exchanging that data.

​NB-IoT is more prevalent in applications and use cases with fixed (stationary) assets and devices. That’s because the device needs to reselect the cell as it travels; with 5G LTE-M, this isn’t the case. So, NB IoT is less suited for mobile (and the reselection of cells has an impact on battery life as it consumes power). In general, fixed assets such as those smart meters or point of sales terminals, are the typical area of NB-IoT but not the sole. You might have noticed this in the types of applications and use cases we mentioned above, such as locks on hotel doors don’t move, or the rat traps in the Netherland dykes are stationary. That doesn’t mean NB-IoT can’t be used for assets and devices that are mobile as we sometimes hear; it’s just limited. There are, for example, real-live NB-IoT applications with trackers, shared bicycle applications, environmental applications with a moving component but little throughput, smart logistics and more.

​​Since NB-IoT uses narrowband bandwidth (or a narrower bandwidth and a single narrow band of 200KHz or 180KHz to be precise), it allows for an increased density of transmission power and that, along with other coverage enhancement capabilities, is what makes indoor penetration and reach overall better. An example that is typically used by the industry is that of smart meters in basements. But also think of buildings or assets in remote and hard to reach locations, and even underground to an extent. In another example, think of gates and fences protecting important assets such as power stations on tops of mountains or in deserts, where mobile phone coverage is not available. NB IoT coverage typically reaches 20% further than existing mobile network coverage for mobile phones.

​NB IoT enables firmware updates over the air and as a mobile network technology it comes with aforementioned benefits regarding quality of service (QoS) and security from utilising existing networks and ecosystems.

​White paper on the Security in NB IoT networks by GSMA